Foltmer looks ahead to 36th season

Middletown High School's veteran football head coach is sheltering in place like everyone else in California, hoping that the 2020 season will get the green light in the face of the COVID-19 outbreak sweeping the nation at present. 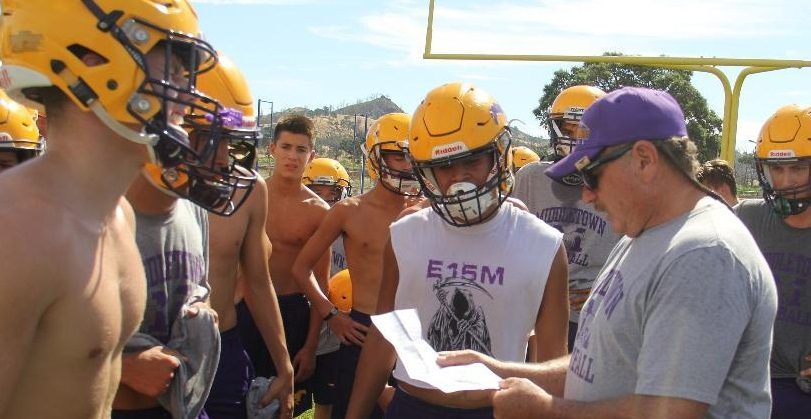 MIDDLETOWN — As he shelters in place at his Hidden Valley Lake home, Bill Foltmer hasn’t been idle. “Little home projects,” said Foltmer, who has logged 35 straight mostly successful seasons as Middletown High School’s varsity football head coach. “I’ve cleaned the leaves out of the gutters, cleaned the pool area, gone through my closet and gotten rid of clothes I haven’t worn for years. Lots of home chores.” Nearing the end of his teaching career in the Middletown Unified School District, the physical education teacher at Middletown Middle School had planned on retiring at the end of the current school year but it likely to hang on a few months into the 2020-21 school year before calling it quits. “June 1 was supposed to be my final day, but you can’t work for the school district for 180 days after you retire, which means I would have to coach football for free. It’s not like we make much, but if I teach through the end of the football season, I can retire after the season.” From teaching, that is. Foltmer, rapidly closing in on 300 career wins, a significant milestone for any coach regardless of sport, plans on sticking around a little longer as the Mustangs’ football coach. How long depends on a bunch of factors, according to Foltmer, whose 2017-19 teams had a memorable run that included two league titles, two appearances in the section finals with one championship, and a sectional playoff loss to the team (St. Bernard of Eureka) that won last year’s section title and a state championship. Middletown’s Bill Foltmer will return for a 36th season at the school as he closes in on 300 career wins. (File photo)“It would be a nice milestone for me to reach, nice for our school and county,” Foltmer said of 300 victories. With 289 wins overall — 270 at Middletown and 19 at Princeton in Colusa County before coming to Middletown in 1985 — Foltmer faces long odds of reaching 300 in the upcoming season only because the Mustangs are facing a rebuilding-type season after losing many of their seniors — three-year veterans Nico Barrio, Dillon Tingle, James Hernandez and Jared Pyzer among them — to graduation. “I don’t think I had a senior on the team who didn’t start for me somewhere,” Foltmer said. “I’m losing my entire line, my quarterback, tailback, fullback. I think it’s one of the biggest rebuilding years I’ve had. “Not that we couldn’t be in the mix again, but we’ve got a lot of work to do,” the ever-confident Foltmer added. If Foltmer falls short of 300 wins in the 2020 season, provided there is a 2020 season because of the COVID-19 outbreak, he said it’s likely he’ll be back in 2021. “I will play it by ear,” Foltmer said. “The last couple of seasons have been enjoyable, the coaches on the team are my good friends, so coaching football is almost a hobby with me. They (assistant coaches) have probably kept me going all these years.” Short of a horrible 2020 season that dampens his enthusiasm, Foltmer said he may even stick around past his 300th win, whenever that comes, for an extra season or two. “I’m still having fun,” he said. Speaking of the upcoming 2020 season, Foltmer said he’s pretty sure the country will be back to normal by then and is hoping for a year free of fires, smoke delays and power outages. He said the COVID-19 pandemic is enough to deal with for now, and at age 64 he is nearly in the category (65 and older) most endangered by the virus based on CDC and WHO statistics. “It’s still a long way away,” Foltmer said of the official start of the football season, “but when hear about the Olympics being canceled, it makes you think (how long this is going to last). I have a hard time thinking they’re not going to have school by the start of next year.” Foltmer said there’s also no rush to get next season’s players into football mode despite the rebuilding phase coming up for the Mustangs. “I’m one of those coaches who thinks that kids should be doing two or three sports,” Foltmer said. “Play basketball, play baseball. I want our kids playing their best football by the middle of the season. I don’t want them footballed out.” If the COVID-19 outbreak is still impacting California by July, it could delay or wipe out the annual passing league the county’s teams participate in. “That would put us back a little bit,” Foltmer said. Middletown, rarely a pass-first team, uses the league more for defense than offense, according to Foltmer. “It’s good for us to practice against the passing teams (such as Lower Lake) and figure out what coverage packages work best for us,” he said. Until then, Foltmer said it will be business as usual for him and his coaching staff even though usual really doesn’t describe what’s been happening in California the last two weeks. “I’ve got plenty of toilet paper,” Foltmer joked. “I live here alone, so there’s no shortage.” His food supply is also holding up as he alternates between cooking his own meals and taking advantage of take-out restaurant food. “About 50-50,” he said. Foltmer said he is keeping abreast of current events now that he has plenty of time to do just that. “Oh yeah, I’m following it (the news) all the time,” he said.
Read More

County health officer calls for ‘more’ to be done against coronavirus

With millions out of work, California needs greater oversight...

Coronavirus: More new cases this week in California than...

Months into the coronavirus crisis in California, new cases aren't slowing and deaths...

Estate planning is best done at times of ease when there is no compelling reason...

Why distance learning is a success in one California district

Across California, schools are rushing to put together plans to continue to deliver...

What you should Know About Physical Activity and Your Teen

How to get your coronavirus stimulus check as quickly as...

One step may be your quickest way to get a stimulus payment from the federal government...

Richard Solorzano, 32, was found at about 2 p.m. Thursday just outside of camp grounds....